Why "Arrow Spur" Should Be Common Practice For Your Bow Hand

It is said that archery is a two limb venture. I can speak confidently about shooting on "the outside" of the bow - yet! - but, when I want to hit a mark, I look at the mark, and as my arms rase, in my head there is a series or "not now's" until "a suitable "now". My bow hand, knows well the feel and weight of the shaft, the power of my bows limbs and what it takes to push the shaft into the target. Arrow spur allows my bow hand to get invovled in the aiming and the power behind my shaft. In other words, the spur, gives me sort of double the ability to control the flight of my shaft than if I were to reley on my bow arms shoulder alone, as the case in most archery practice today, where the archer aims and let's the limbs "do what they do".  I draw my string arm and thrust the shaft, using the bow with my bow hand.

I am of the position that said technique was common to many of the "archery dependant" individuals in our history.

To finish, I believe it is knowledge of tecniqus like "the spur" that lead to bow designs with wide brace heights, and the unusual Japanes keyudo bow (which is not commonly being used today as the design was originally intended), but I have not had the opportunity to test that belief.

Posted by Justin at 8:10 PM No comments:

For this project I am using beaver rawhide and buckskin to make a neck sheath as buckskin on its own is not suitable to make a "sharp edge" resistant sheath, the rawhide must be added as inner liner.

The knife used was made from a file and finished simply to make the most of the steel.

I began by soaking the main rawhide, an additional reinforcing strip, and a hide thong use make a critical stitch located at the bottom of the sheath 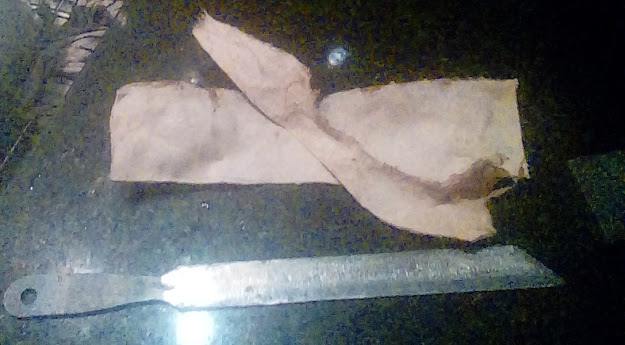 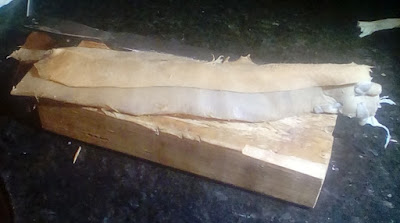 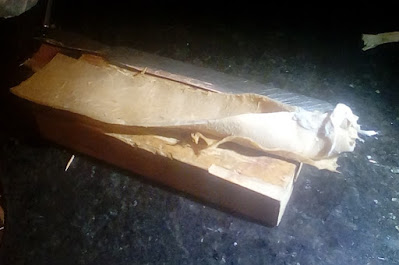 Once thoroughly reconstituted, I stitched, with rawhide, where the tip will ultimately sit once the rawhide interior of the sheath is dry; I avoided the very tip and used the dull slanting area just above the edge as a stop location for this rawhide stitch.

I did not stitch along the beaver rawhide - only the tip.

I slid the knife carefully into the soaking sheath and viced down the folded rawhide for a few hours to set.

The final stages of drying I periodically flipped it on a table. I knew that the rawhide would eventually develop slight ripples on the unstitched or reinforced area where the back of the blade was exposed but I was ok with this.

Once dry, I simply stitched the buckskin sheath around the knife. 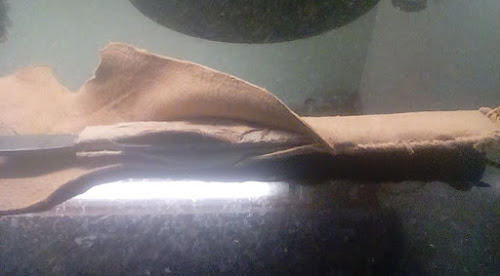 Whith the choke knife (or uluit) I followed the same procedure however without the reinforcing layer of rawhide. The ends of the beaver hide were sinew wrapped, the knife slid into the sheath, and viced for a few hours to set. 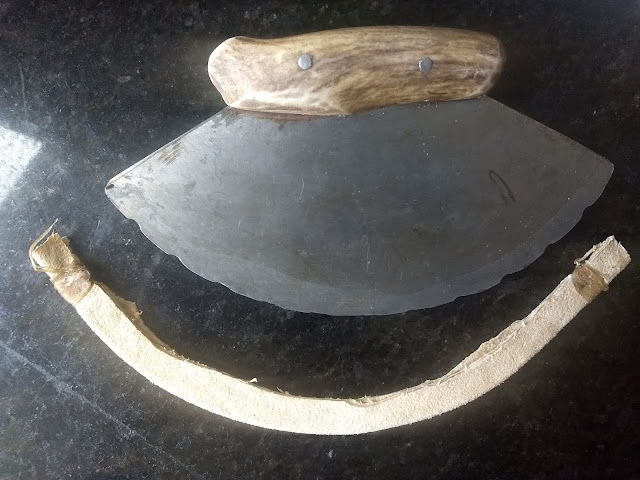 For the final hours of drying, the knife was left on the edge of counter (so the handle would hang over the edge and the blade, lay flush) with only some jars left where the ripples tride to form. 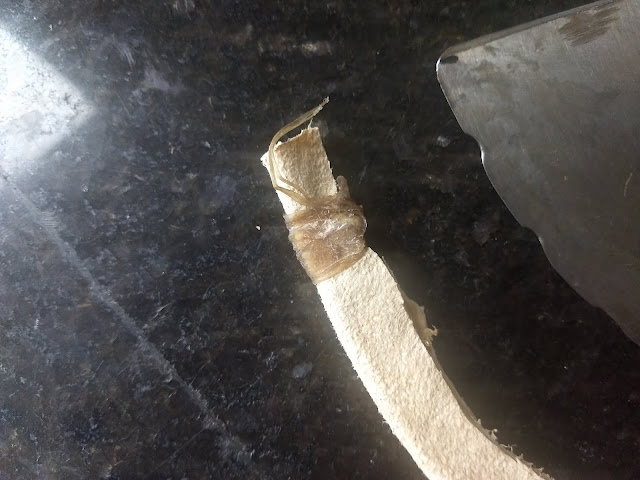 Whith the rawhide dry, the simple buckskin cover was made. 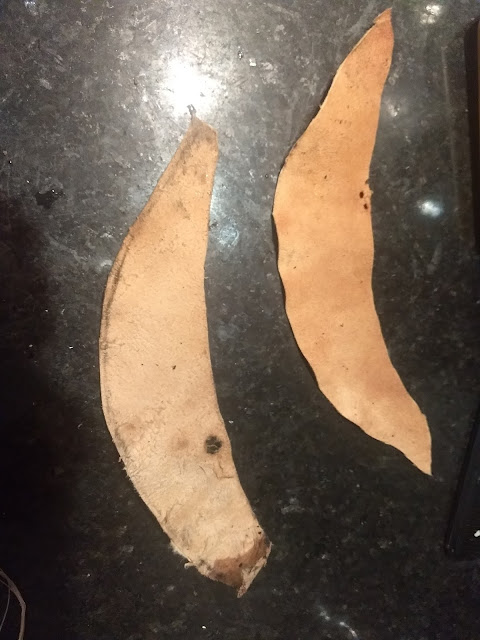 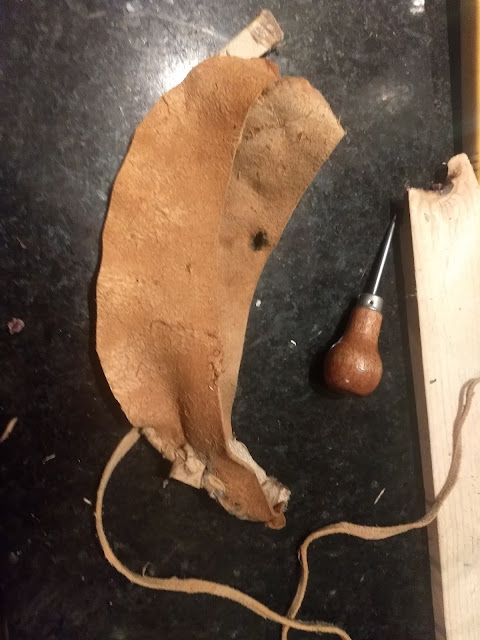 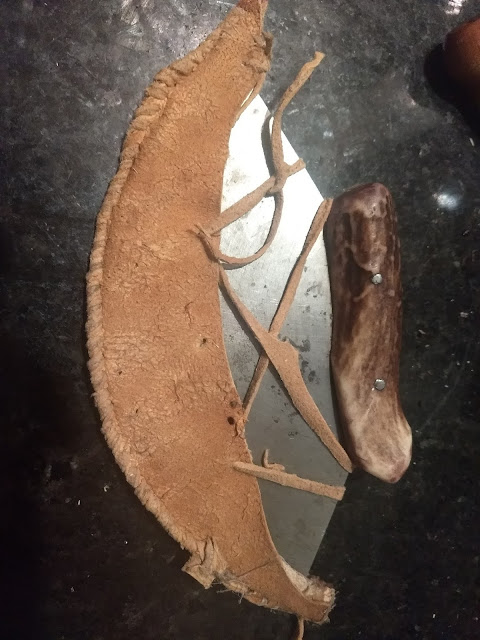 I prefer buckskin to sinew for sewing.
In the past I had with great success, opted to stitch the buckskin around the plasic sheath the knife had already come with; the rawhide simply took the place the plastic.

Posted by Justin at 8:51 PM No comments:

It is difficult to avoid the detection of the small forest sentinels and their location revealing chatter, however some tips to mitigate this may be the following: avoid their dens (the piles of nut refuse with holes throughout). Regardless how long you linger near by, they will outchatter your patience. Stay close to trees, lean up agaist them. This seems to camouflage you so it is often the case a close squirrel will simply skitter by insead of sounding the alarm.
Posted by Justin at 10:00 PM No comments:

Being outdoors is not only knowing every outdoor trick in in the book or being tough. Its not about how big you are or the size of your muscles. I remeeber seing a  large drop of water with fur andeyes while in the Yukon one day and it eluminated me immensly to the following. That little mouse could survive the Yukon winters naked and near many more, unadapted creatures, immensly larger, would run away crying for mom, most men on this planet including myself. Being outdoors is too knowing when to go and when to hold back; its having respect, and swimming the flow of that environment - to a degree. We all understand this to and we become more aware our "current" environment as we mature.
Awareness does not me we dont swim against it at times. Like fish fighting the current, we too must take, kill, eat, and do-the-dirty to make our marks and do our part untill our spark of life is taken from us or gifted.
Posted by Justin at 11:49 PM No comments:

Never Look Back Unless You Leave Your Pack.

When in new bush, everything has a tendancy to look the same. So look for the unique. When you throw down your pack to hunt, you should already know to be moving slow and keep your eyes open.

Not only should you have an eye for game, but uncommon land marks. As you walk slowly around keep an eye out for fallen or stripped trees. Watch your game trails, and how they look. Look arround you 360 degrees.

Look back and keep a mental snap shot of what the way behind you looks like because when you go back, if you try to take the same way back, you will want to have an idea of what it looked like from that perspecive; this may also reveal the unique trees and land marksfrom different angles. When walking back, aknow that the sun will be at a different angle, thus making finding your way even more difficult.

Give yourself the Hymnic Manouevre - words of experience

I was near alone, no chance of help, and when you choke you wont have a lung full of air like you would if you were preparing to dive under water, so act quick. I beat with my fist around where my lungs sit behind my rib cage - nothing - *losing air and I see the end is immanent*. Quickly, I recalled the anatomy of the animals I had butchered, I knew about the location of the diaphragm, a flat muscle that separates the intestine from the lungs and heart, both which are protected by the rib cage. I struck again just under where my rib cage ended and my unprotected intestine sit. Strike upward. The piece shot out, just like in the movies.

Shooting on the Outside of Bow While Hunting

I've already mentioned, holding your arrows in the draw hand eliminates the need for a quiver, bow or otherwise.

Being able to knock and shoot from the outside of the bow eliminates the need to have an arrow knocked while stalking or walking in the woods. In a WELL TRAINED ARCHER this opens up the world of ground hunting as there is less of a need to be ready for the shot with an arrow knocked. Those who have ground stalked know how cumbersome and strange a knocked arrow feels while in dense bush.

To have these skills and shoot fast however does NOT mean you can scimp on practicing; to reach an acceptable level of skill for hunting using these techniques requires immense dedication, disaplin, and practice.

Are the techniques necessary though? No there are many successful ground hunters who use traditional bows and indigenous hunters who shoot off the inside of the bow - these individuals have mastered the see without being seen. I may also note that it seem that the hunters who do use the above mentioned skills seem to come from cultures who were also, often at war with other humans.

Posted by Justin at 9:19 PM No comments: